Eliminating Female genital mutilation (FGM) is finally in the spotlight of the international policy agenda. It is part of the United Nations sustainable development goal 5 – to achieve gender equality and empower all women and girls, with a target to “eliminate all harmful practices, such as child, early and forced marriage and female genital mutilation”. The World Health Organization estimates that more than 200 million girls and women worldwide have been subjected to FGM, with approximately three million girls at risk each year. The majority of girls are cut before they turn 15 years old.

Female genital mutilation (FGM) comprises of all procedures that involve altering or injuring the female genitalia for non-medical reasons and is recognized internationally as a violation of the human rights of girls and women. FGM is a human rights violation, a form of torture and an extreme form of violence and discrimination against girls and women, rooted in harmful gender norms. The continuation of FGM sustains massive gender inequalities in practising societies, as it limits opportunities for women and girls to realize their full rights and potential.

In areas where FGM is prevalent, IPPF clinics are often the first point of contact for affected women. To date, IPPF has put in place various efforts to advance this work, including; the launch and dissemination of a Statement by the International Medical Advisory Panel (IMAP), offering programmatic recommendations to MAs on how to address FGM; provision of technical and financial support to implement FGM-related initiatives in key countries; partnership building.

"I cannot talk about the bedroom when all I experience is pain and recurrent infection. My husband knows this. We both agree that our daughter will never be cut' and growing understanding from young male peer educators, 'we do not need to cut our daughters at all, not even the 'sunna'. I will marry whoever I marry but she does not need to be cut. If I have daughters, they will not be cut, not at all."

At a prevalence rate of 98.9% Somaliland has one of the highest rates of FGM in the world. With evidence showing that about 1 in 5 girls who have been subjected to FGM, had the procedure performed by a trained medical professional (in some countries it is as high as 3 in 4 girls).

Somaliland Family Health Association (SOFHA), the IPPF MA in Somaliland is at the forefront of advocacy to end FGM. A baseline research carried out by SOFHA and partners showed that FGM is widespread and cuts across all ages and locations, including in urban and rural communities. Implemented with funding support from the Norwegian Development Agency (NORAD), “Empowering a first generation of Somalis to Abandon FGM”, is a flagship initiative that has gained momentum and is catalysing change from the grassroots upwards. 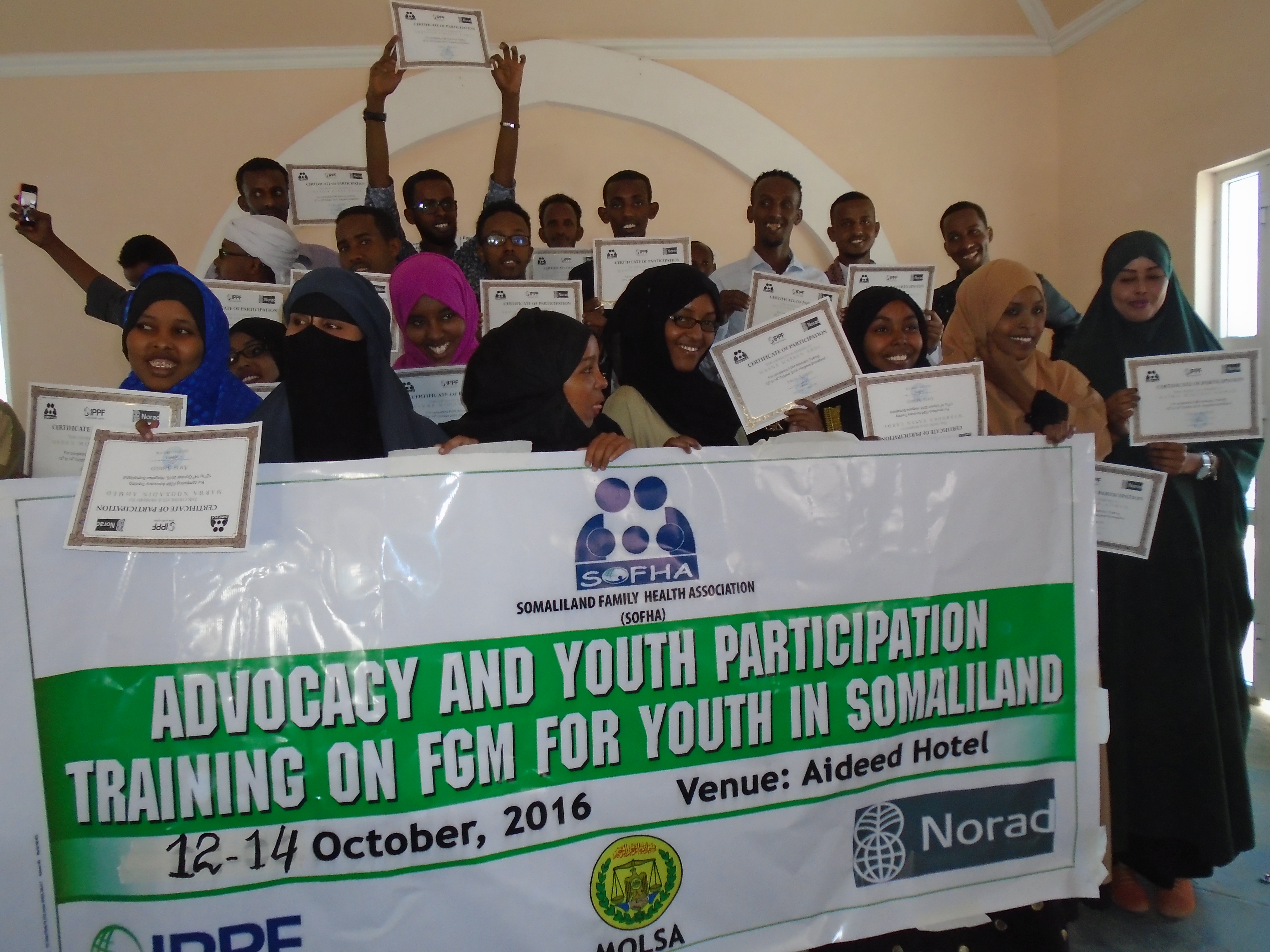 Inspired by their belief in social norm change that is from their own experience and that of their peers, many Somali women from the diaspora are returning home to lead the struggle to end FGM.

Amal Ahmed and Edna Adan Ismail, SOFHA executive director and president, are some of those leading the struggle by building partnerships with government ministries and civil society organisations (some of whose leaders are also returnees from the Diaspora), in schools and communities and reaching out to young women of the Somali diaspora - to build a movement for social change;

"We recognise that to succeed in ending FGM - we must work at all levels and with all players, including religious leaders, young people, mothers and grandmothers; focusing on human rights and gender equality and to speak in a language that is understood".

Yet the practice is far from over. Much more needs to be done, to anchor policy into practice. IPPF and Member Associations will continue to fight for change to ensure women and girls can live free from sexual and reproductive coercion and all forms of gender based violence.