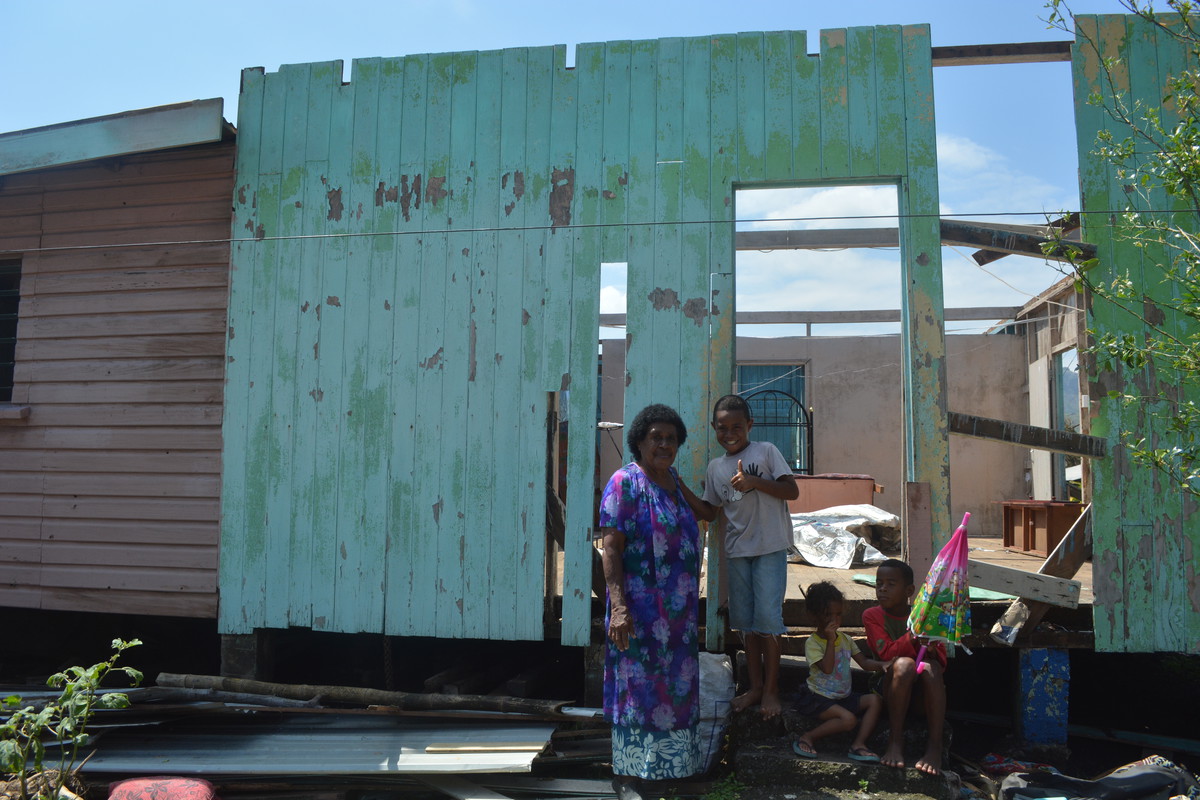 “I have never experienced such a strong cyclone in my 77 years of life.”

“I have never experienced such a strong cyclone in my 77 years of life.” Jokaveti Bavou lives in the village of Drauniivi, in the Fijian province of Ra. It was right in the path of Cyclone Winston,...

“I have never experienced such a strong cyclone in my 77 years of life.”

Jokaveti Bavou lives in the village of Drauniivi, in the Fijian province of Ra. It was right in the path of Cyclone Winston, the strongest storm to ever strike the Southern Hemisphere.

A week on from the disaster, Jokaveti, her son Jim and her grandchildren are safe. But there is no longer a roof on her house, and precious little left inside.

In a village of 910 people, 75 houses were completed destroyed and about 65 damaged.

Jokaveti was in her house with her grandchildren when Cyclone Winston arrived. “On Saturday night the winds started to increase. I told Jim that I was not sure of the house; I didn’t believe that it would be able to keep us safe. I told him that if the house started to collapse, we would run to his house for safety.”

“The wind was getting stronger and when I looked at the back door, it had blown open. I took a hammer and nail to it. But when I got back to the other room, the main door had blown open and the wind was really strong. Then the wind took the roof off my house.”

“I told my granddaughter that everything was terrifying and we needed to go and hide somewhere. It was not safe to be in the house because of the flying debris.”

“I got out and my son called out from his house and told us that we should go and hide underneath our house. He tried to come out of his house to save us, but the wind was so strong and roofing iron was flying around.”

“I went underneath my house with my grandchildren holding a lamp and stayed there until the wind died. My son’s eyes never left us. Luckily for us a corrugated roofing iron flew and covered where we were hiding. I just cried and continued to thank God for keeping us safe.”

“I could sense fear from all of us including my grandchildren. They were crying too. My son kept on calling to check on us until the wind died down.”

Miraculously, no-one from Jokaveti’s family or the village was killed or seriously injured.

IPPF is establishing centers in the Northern and Western parts of Fiji to provide medical services, especially those that deal with maternal and child health and sexual and reproductive health.  It is working closely with the Reproductive and Family Health Association of Fiji (IPPF’s member in Fiji), UNFPA Pacific, Empower Pacific, Fiji’s Ministry of Health and Medical Services.