"Girls have to know their rights"

Aminata Sonogo listened intently to the group of young volunteers as they explained different types of contraception, and raised her hand with questions. Sitting at a wooden school desk at 22, Aminata is older than most of her classmates, but she shrugs off the looks and comments. She has fought hard to be here.

Aminata is studying in Bamako, the capital of Mali. Just a quarter of Malian girls complete secondary school, according to UNICEF. But even if she will graduate later than most, Aminata is conscious of how far she has come.

“I wanted to go to high school but I needed to pass some exams to get here. In the end, it took me three years,” she said. At the start of her final year of collège, or middle school, Aminata got pregnant. She is far from alone: 38% of Malian girls will be pregnant or a mother by the age of 18. Abortion is illegal in Mali except in cases of rape, incest or danger to the mother’s life, and even then it is difficult to obtain, according to medical professionals.

Determined to take control of her life

“I felt a lot of stigma from my classmates and even my teachers. I tried to ignore them and carry on going to school and studying. But I gave birth to my daughter just before my exams, so I couldn’t take them.”

Aminata went through her pregnancy with little support, as the father of her daughter, Fatoumata, distanced himself from her after arguments about their situation. “I have had some problems with the father of the baby. We fought a lot and I didn’t see him for most of the pregnancy, right until the birth,” she recalled. 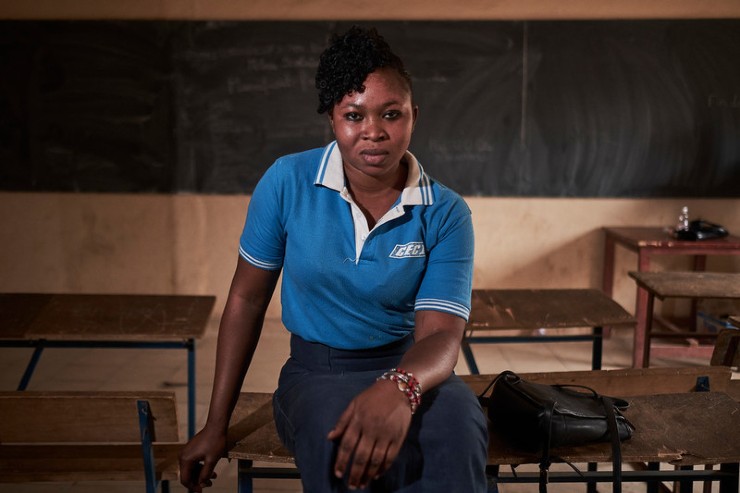 The first year of her daughter’s life was a blur of doctors’ appointments, as Fatoumata was often ill. It seemed Aminata’s chances of finishing school were slipping away. But gradually her family began to take a more active role in caring for her daughter, and she began demanding more help from Fatoumata’s father too.

She went back to school in the autumn, 18 months after Fatoumata’s birth and with more determination than ever. She no longer had time to hang out with friends after school, but attended classes, took care of her daughter and then studied more. At the end of the academic year, it paid off. “I did it. I passed my exams and now I am in high school,” Aminata said, smiling and relaxing her shoulders.

Aminata’s next goal is her high school diploma, and obtaining it while trying to navigate the difficult world of relationships and sex. “It’s something you can talk about with your close friends. I would be too ashamed to talk about this with my parents,” she said.

She is guided by visits from the young volunteers of the Association Malienne pour la Protection et Promotion de la Famille (AMPPF), and shares her own story with classmates who she sees at risk.

“The guys come up to you and tell you that you are beautiful, but if you don’t want to sleep with them they will rape you. That’s the choice. You can accept or you can refuse and they will rape you anyway,” she said. “Girls have to know their rights”.

After listening to the volunteers talk about all the different options for contraception, she is reviewing her own choices. “Family planning protects girls,” Aminata said. “It means we can protect ourselves from pregnancies that we don’t want”.