Please do not forget the Yemeni people. Since 2015 we have been living in the world’s worst crisis. We need your support.
Jamila Alsharie, Program Director
Yemeni Association for Reproductive Health (YARH)

The humanitarian crisis in Yemen remains the worst in the world. Years of conflict have led to the collapse of the economy and social services. Around 24 million people – over 80 per cent of the population – are dependent on aid and now face the ‘triple threat’ of conflict, cholera and COVID-19.

As many as 4.3 million people have been displaced in the last three years. About half of them are women whose plight is particularly severe. UNFPA estimates that one million pregnant and breastfeeding women are malnourished, and risk giving birth to babies with severely stunted growth. An estimated 144,000 women are likely to develop childbirth complications.

In the middle of this crisis in 2017-18, YARH, with support from the Government of Japan, delivered desperately-needed sexual and reproductive health care in Amran, western Yemen, to internally displaced people in camps as well as to women and children in their host communities.

Ali Noaman, YARH’s Executive Director, explains: “The JTF project has been very positive for local people. For some, it was the first time they had sexual and reproductive health care and became aware of the need for hygiene. We are beginning to see people seeking health care and attitudes towards sexual and gender-based violence changing”.

It’s been a positive experience for YARH too. “We’ve reached new areas, and forged essential partnerships with primary health care and with the Ministry of Health, local NGOs and Yemen Women's Union for IDPs - meaning we're able to coordinate our work for IDPs.” says Jamila.

ARH faces many challenges. Very few of Yemen’s reproductive health facilities still function. Health workers have not been paid for more than two years, leaving Yemen with only 10 health workers per 10,000 people. This means many people who come to YAHR in search of sexual and reproductive health services may have other serious underlying health problems.

In addition, amid conflict and crisis the country has become increasingly sectarian and family planning has become a taboo subject, prohibited by some communities, and even, at one point, by the State. Sometimes YARH’s consignments of contraceptives are confiscated by officials at the airports.

In the face of these mounting challenges, YARH has learned to address the needs of its clients flexibly despite mounting pressures and insecure supplies. 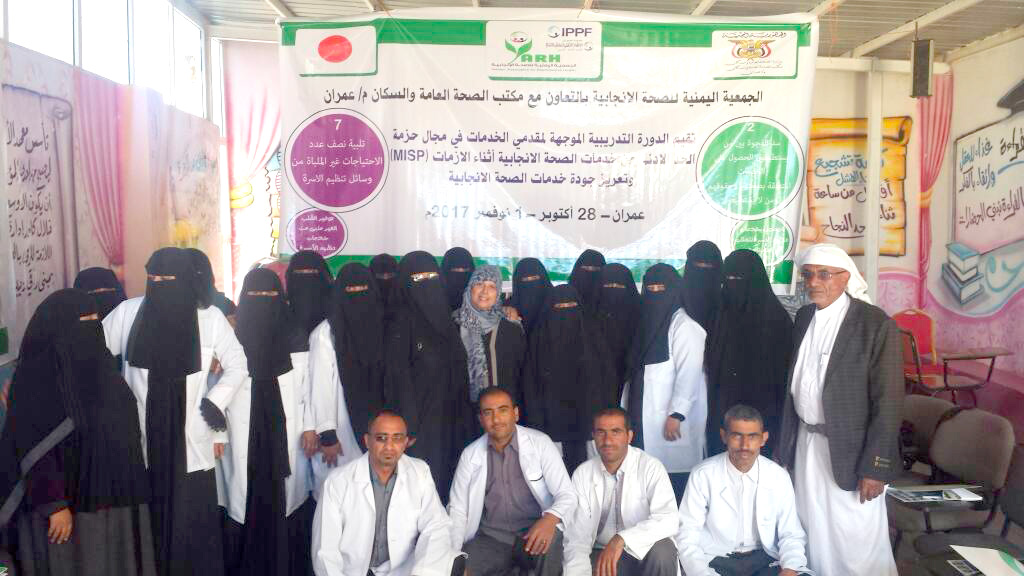 Continuity is essential for reproductive health

any NGOs work in Yemen but they often only provide short term emergency relief.

Ali explains: “Emergency projects are helpful, but a short term approach of a few months at a time is no good for sexual and reproductive health. We’re seeing women who gave birth last year come back pregnant again because they don’t have access to family planning.”

“The unique advantage of the JTF project was the longer project duration of almost 2 years which allowed us to have continuity - making a big difference in sexual and reproductive health, and helping us have real impact. This is especially important as most medical staff haven’t been paid for years - the project funding means we can pay them an incentive and increase the supply of medical staff.

“More funding to train young women in camps as peer educators would mean the communities will be able to retain such human resources for longer and our interventions will have have greater continuity.”

Covid-19: as if things couldn’t get worse

n top of everything comes COVID-19. COVID-19 testing and tracing is virtually non-existent, leading to confusion over its spread and lethality. What is clear is that the virus is deadliest among displaced people for whom social distancing, frequent handwashing and wearing masks are unachievable in crowded accommodation lacking basic resources, sometimes even water.

In April - we had to close all YARH clinics in the country for two months. The challenge for us has been to keep our health workers from getting sick. We don't have tests so we have to monitor our staff and clients for Covid and tell them how to watch out for symptoms. 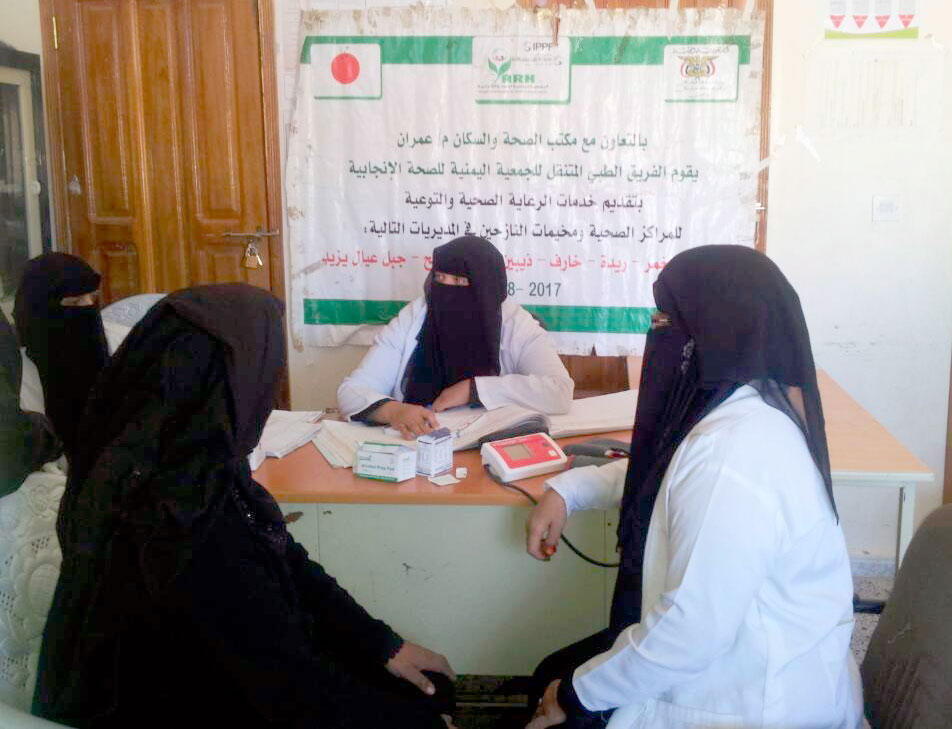 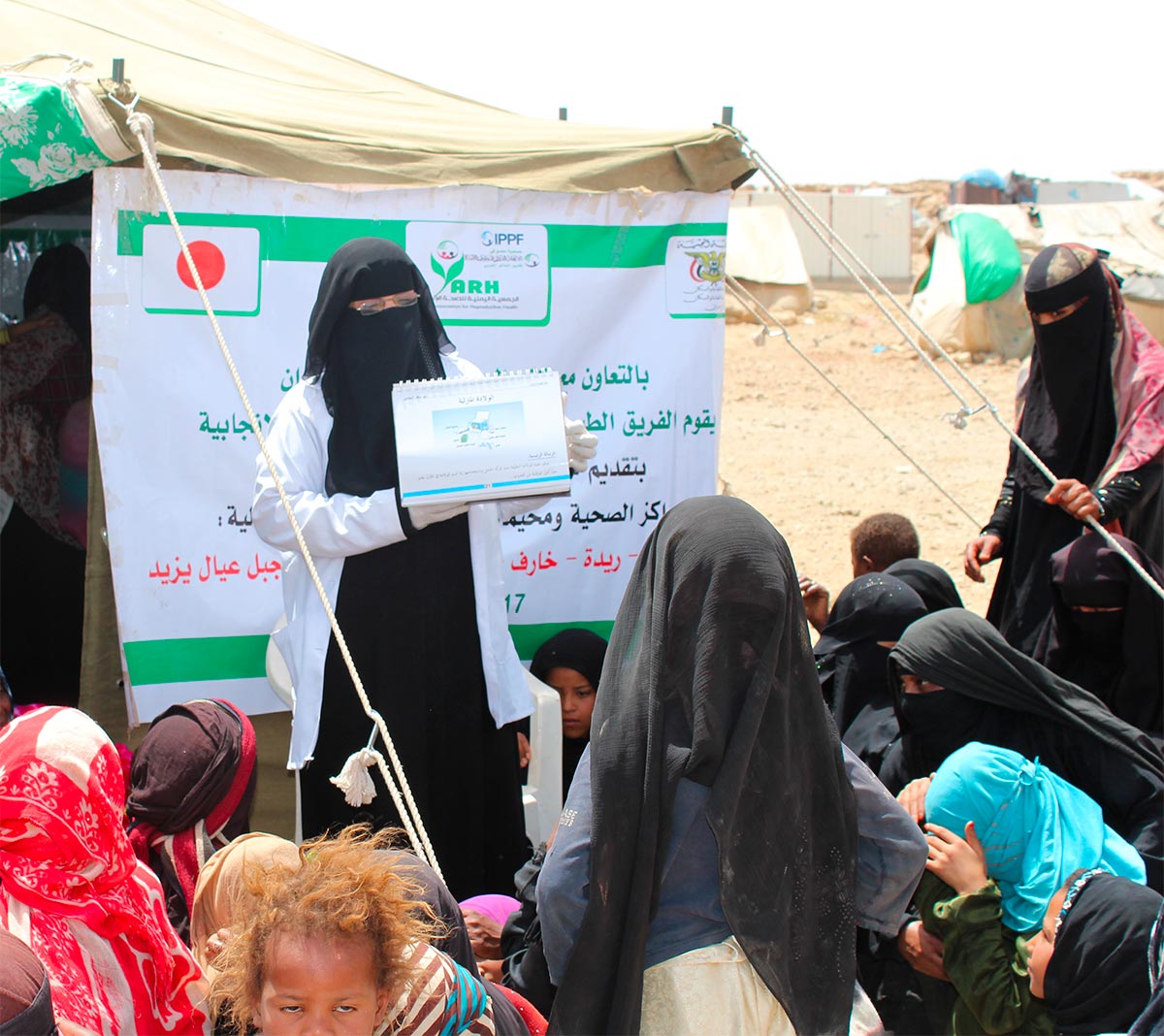 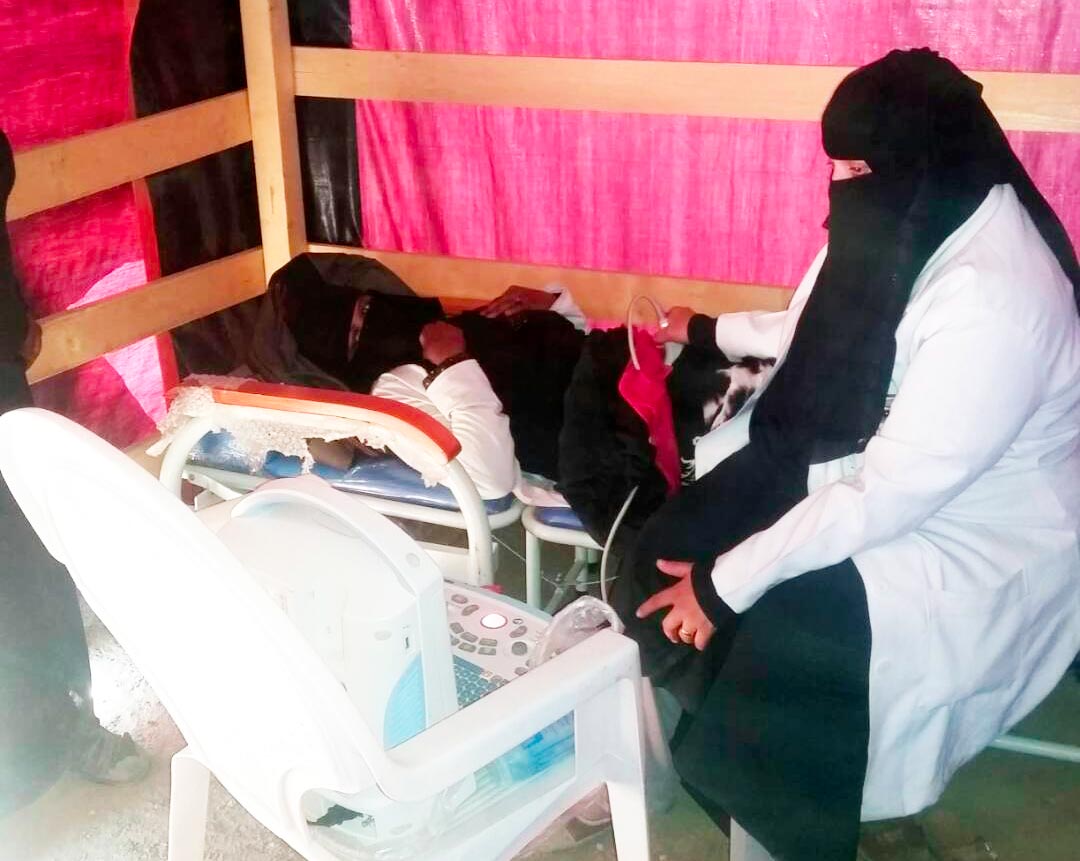 ith limited shelter options, displaced women and girls tend to suffer most from lack of privacy, especially when it comes to sanitation - making them ever more vulnerable to violence and abuse.

Jamila: “One camp now has separate toilets for men and women with the women’s placed far from the men’s - so that women are not so vulnerable. But that's just one camp. This needs to be happening everywhere.”

Displaced women across the world are highly vulnerable to all forms of sexual and gender-based violence (SGBV). The frustrations of camp life can also lead to violence, including sexual abuse, within the family, and Amran is no exception. Jamila estimates that cases of SGBV have doubled in camps over the past few years.

YAHR started a new JTF project in July 2020 in Sana’a city. Thanks to the funding from Japan, YARH arranges for a psychologist to visit the Sana’a camps twice a month.

Jamila: “We often see women with bruises. They may have been hit by their husband or husband's family. We can refer them for legal support but many choose not to take legal action as they have no safe place to go to after that. We do what we can to support them to keep safe and to manage their situation and we work with men to help them control their violent behaviour.”

Ali and Jamila are hopeful that sharing their story will remind the world of the crisis in Yemen, and believe that, with help from the people of Japan, YARH is bringing positive change to the lives of people who have lost everything.

In addition to its work with internally displaced people in Amran and Sana’a, YARH provides services across Yemen, through two clinics and a youth-friendly service centre. YARH plays a key role in building strategic partnerships with organisations running programmes for young people, and is a powerful advocate for political support for sexual and reproductive health and rights .