Providing a safe space for sex workers in Ethiopia 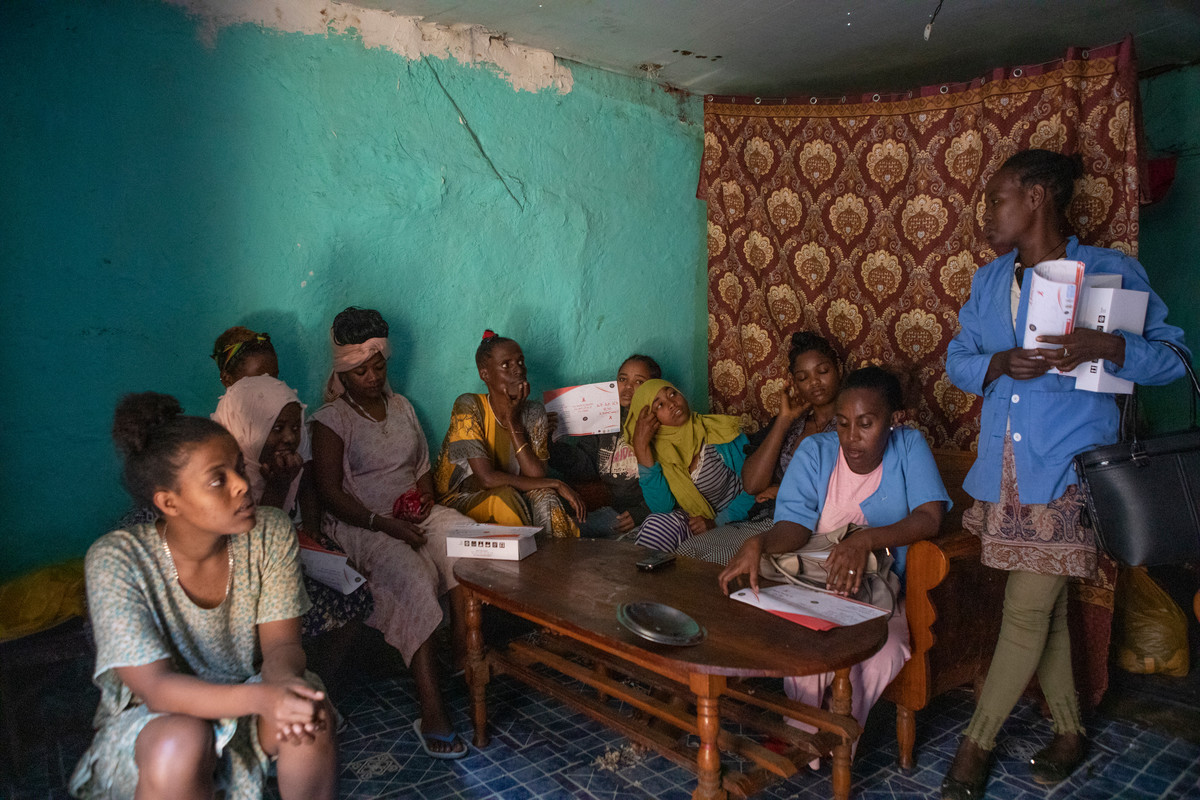 At a small clinic in a quiet, residential neighborhood, ten women are preparing to hit the streets for a day of potentially life-saving work; by donning white coats and filling their handbags with condoms. These peer educators are former or current sex workers who teach others how to protect themselves from sexually-transmitted infections (STIs) and unintended pregnancy. Their mission is to educate sex workers about STIs, HIV and contraceptives, distribute condoms and persuade people to access the full range of services at a confidential clinic in Jimma, the capital of Ethiopia’s Oromia region.

“Some sex workers tend to have no knowledge, even about how to use a condom,” she said.

A safe space for underserved populations

The Jimma confidential clinic was set up in 2014 to help at-risk and underserved populations like sex workers receive free and bespoke services that include HIV and STI testing, treatment and counselling, contraceptives and comprehensive abortion care.

The peer educators work as volunteers and receive 2,000 Ethiopian Birr (about USD 60) per month for travel costs.

Their work is challenging, and they travel in pairs for safety because some people do not welcome their messages.

“When we try to tell people about HIV we can be insulted and told: ‘You are just working for yourself and earn money if you bring us in.’ They sometimes throw stones and sticks at us,” said 25-year-old Melat Tesfaye*.

They also have a hard time persuading women that the staff at the confidential clinic are friendly towards sex workers and will keep their information private.

“They have had bad experiences at other clinics so they fear coming in, or they are scared about being tested for HIV,” said Gueba.

“In other clinics, they don’t keep people’s HIV status confidential. Doctors and nurses discuss it in public,” she said.

But a lot of sex workers ask questions about HIV and what to do if they test positive.

Working with people living with HIV

The Oromia region ranks sixth out of eleven regions for HIV prevalence rates but has the greatest number of people living with HIV due to its large population, says Dessalegn Workineh, who manages the Family Guidance Association of Ethiopia’s (FGAE) south west area office in Jimma.

“There is a need to work on awareness raising on HIV and AIDS,” he said, particularly among women.

Another confidential clinic operates in the nearby region of Gambella, where HIV prevalence is high.

Getting information to women often involves going out to find them.

“I once found a woman who did not know her status who came in and found out she was positive. She had a young child and blessed me afterwards. It really saves lives,” says Gueba.

Peer educators focus on areas with a lot of hotels and bars and also broker's houses, where sex workers find clients.

At one broker’s office in Jimma, Gueba and Tesfaye speak to half a dozen sex workers about staying safe by using contraceptives.

It’s the first time 21-year-old Jamila has heard about condoms.

“I never used a condom before and it’s interesting to hear that,” she said. “Now I think I can keep myself from getting diseases.”

Eighteen-year-old Ameya had left her family and village 100km away for the first time to find a job cooking, cleaning or waitressing, and had arrived at the broker’s house a day before.

“I’m interested in the family planning methods and I think I might use them now. Maybe the Depo-Provera [contraceptive injection],” she said.

Lydia, 22, met the peer educators when she turned to sex work a year ago. She knew nothing about condoms or family planning and returned for further counselling.

“I never tested for HIV and did not use contraception and now I test every three months and use Depo-Provera and condoms,” she said.

“We are happy when we meet these people and we tell them our stories, the difficulties sex workers face and how they can protect themselves,” says Tesfaye.

Men will offer to pay double or triple to not use a condom and brokers routinely take new girls’ virginity and have sex with them, often without using condoms, until they get clients.

In Jimma and other regions, budget issues and reallocations mean that outreach services to sex workers have been cut in recent years.

“We had to decrease our catchment area and services by around 30 percent,” said the clinic’s manager Eremiah Getachew, who used to have 20 peer educators but had to let ten of them go.

This followed fears that Ethiopia’s ten confidential clinics would have to close after Donald Trump re-instated the Global Gag Rule in 2017, which does not allow any US funding to go to organizations with links to abortion care.

Emergency funding from the Netherlands kept the clinics open, but some services changed.

The Jimma clinic was also forced to stop giving sex workers sanitary products, soap and water purification tablets. It currently serves about 400 sex workers per month, rising to 600 during coffee harvesting, when more people come to the city.

Gueba sees the effect that outreach has and wishes there was more funding for it.

“I do this because it saves other people’s lives. Even if we didn’t get paid transport costs, I would still go and do it,” she said.

“This is a really important job. And we need the world to know about it.”

“I used to be a sex worker, so I have a shared experience with them"
Read more