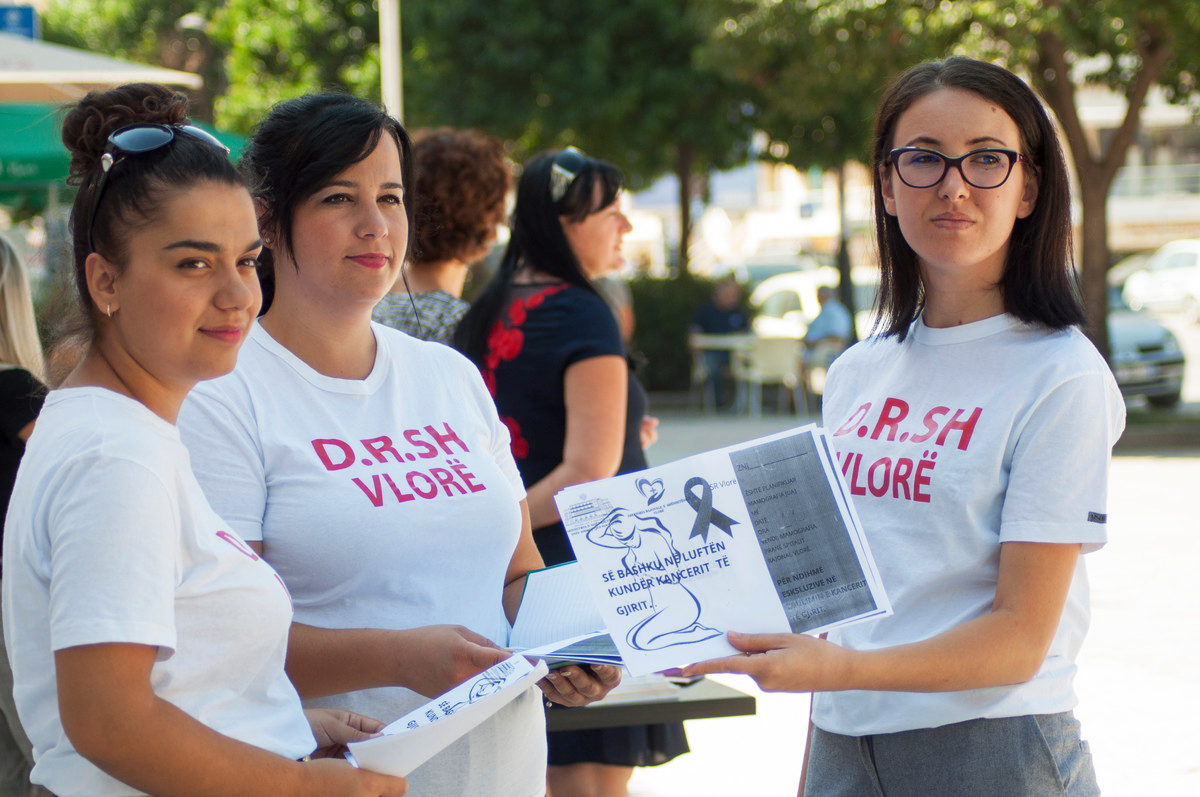 Cervical cancer is the second most common cancer among women and girls in Albania. Financial and physical barriers often mean many delay seeking medical advice, especially those that live in rural are...

Albania is home to 2,870,324 people, approximately half are women and girls. The political events of the 1990s saw Albania become one of the poorest countries in Europe, leaving the nation to try and rebuild their fractured infrastructure. Including an ill-equipped healthcare system, that is still struggling to keep up with demand.

Today, Albania benefits from a universal healthcare system, but not without its issues. Albania has the lowest proportion of doctors for its population in Europe - 115 per 100,000, meaning those that live in hard to reach and rural areas face additional barriers to life-saving healthcare.

Cervical cancer is the 4th most common female cancer in women aged 15 to 44 years in Albania. Although Albania has a national cervical cancer screening programme, it is not widely promoted, and the service is not always available. Relying on the traditional method of screening – the Pap smear – further complicates women’s access, as the majority of health centers lack basic equipment and resources including gynaecological beds and specialist gynaecologists. The long processing times from the initial test to receiving the results adds further complication to women seeking cervical cancer screening. The situation worsens when it comes to rural areas, where 45 percent of the population lives. Many women also face financial barriers when it comes to accessing healthcare.

In December 2015, IPPF’s Member Association, the Albanian Centre of Population and Development (ACPD), began a campaign to increase women’s access to healthcare in rural areas. An alternative, faster and cost-effective cervical cancer screening tool and treatment plan were developed – a method known as VIA and Cryotherapy.

What is VIA & Cryotherapy?

Visual inspection of the cervix with acetic acid (VIA) is a process of screening and examining the cervix. Pre-cancerous lesions on the cervix will turn white when the acid is applied.

This simple procedure can be done in a clinic setting without the use of a laboratory and allows for immediate treatment of any pre-cancerous lesions with cryotherapy.

Cryotherapy is a gynaecological treatment that freezes and destroys abnormal, pre-cancerous cervical cells. Cryotherapy is not a treatment for cervical cancer. VIA has the potential to revolutionize cervical cancer prevention efforts, particularly in low resource settings, because it eliminates the need for laboratories, transportation of specimens and provides immediate test results.

VIA needs less equipment and fewer specialists than traditional cervical cancer screening methods like Pap tests. Results from VIA are available immediately so women can be screened and treated in one single visit.

Working with the Ministry of Health and Social Protection (MoHSP), ACPD advocated for the nationwide inclusion of VIA and cryotherapy to Albania’s national cervical cancer screening program. There are many benefits to VIA, that include:

Since the launch of the campaign in 2015, ACPD has reached over 1000,000 women and men through their clinics, mobile outreach, videos and social media. 520 were young people and 390 men and women were based in rural areas.

Between 2016-2017 3,274 women were screened and 70 healthcare providers were trained to give VIA tests and Cryotherapy treatment.

So far, the results have been encouraging. Mrs. Brunilda Hylviu, head of ACPD says that “this cost-effective cervical cancer screening tool is well-accepted, and most women were thrilled by the idea that the pre-cancerous lesions could be screened and eliminated at the same visit. We have seen tears of joy in women’s eyes and got heartfelt hugs from women who have been examined with VIA. Health professionals have a positive attitude regarding VIA because they can see in practice how effective it is with patients.” She says staff working at the health centers are very enthusiastic about VIA seeing the value it has added to the services they provide for their communities.

For the Albanian Centre of Population and Development, 2018 is the year of advocacy. “What we ask from the Government is first to prepare a National Action Plan for the Screening of Cervical Cancer as other countries in the region did. Second, to include VIA as an effective method proved for screening in rural areas. We do agree that Albania as a European country should aim for highest standards of screening such as HPV, but considering that we still have areas where women live without potable water or electricity, we see VIA as an alternative screening method based on evidence approved by WHO. Our motto is that not a single woman should die from cervical cancer and a good national screening program that reaches every woman can achieve this objective.”

The challenges ahead are still big, but Brunilda is hopeful that they can make a difference. “I am hopeful that we will have a positive result and we will succeed”, she says.

Albanian Center for Population and Development