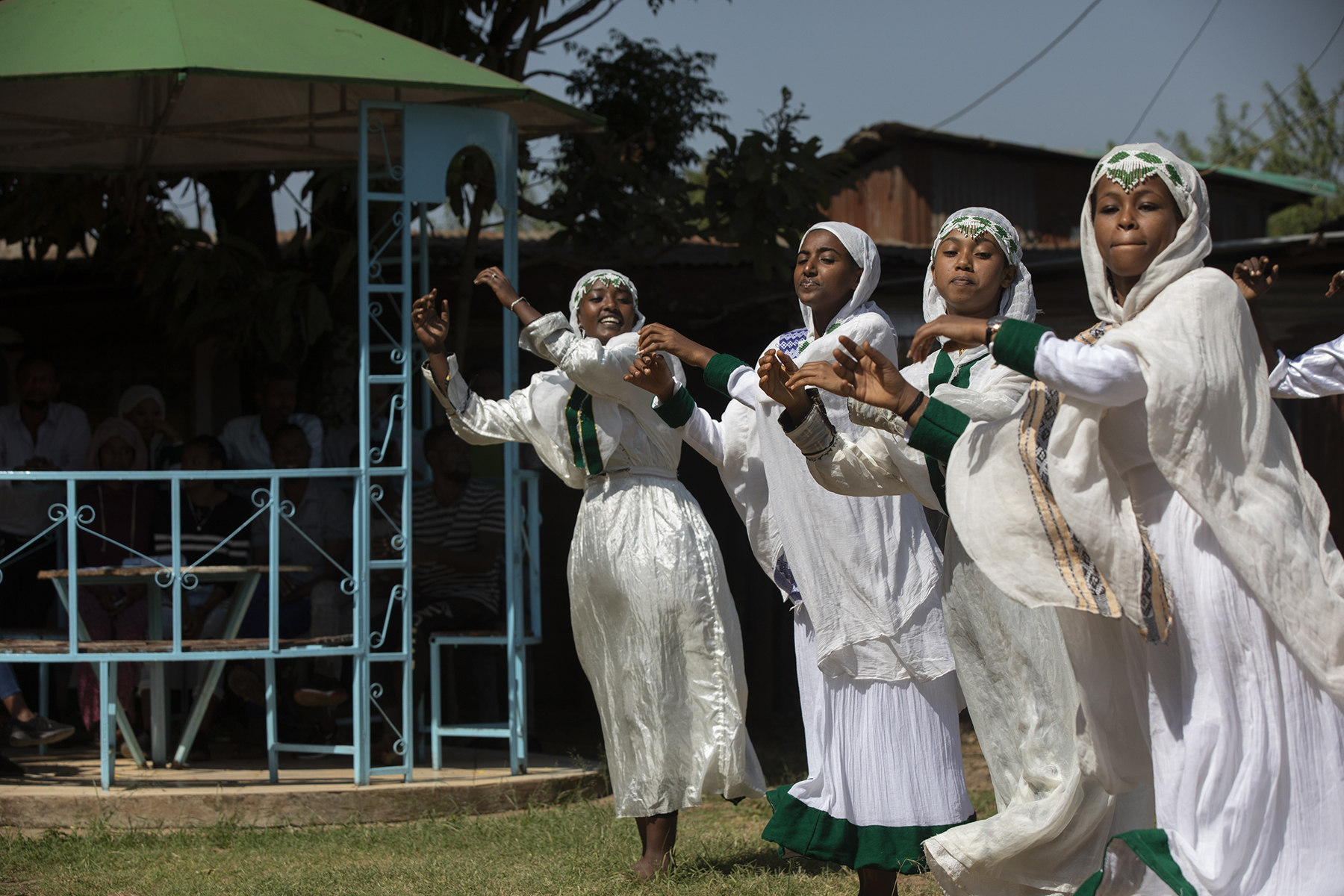 In Ethiopia, getting young people’s attention about sexual and reproductive healthcare is no easy task. But at a youth centre in Jimma, groups of young people are getting vital messages about sexual h...

In Ethiopia, getting young people’s attention about sexual and reproductive healthcare is no easy task. But at a youth centre in Jimma, the capital Oromia region, groups of young people are getting vital messages about sexual health and contraception out to their peers through dance, song, and poetry.

Student Jumeya Mohammed Amin came here to train as a peer educator for sexual and reproductive health [SRH] three years ago, when she was 14 years old. In her community – a conservative village 20 km outside the city – early marriage and pregnancy was common, and information about SRH practically unheard of.

“Girls younger than me at the time were married. The youngest was only nine,” said Amin, who would watch her classmates have to leave their home, school, and playmates behind.

In Amin’s community, to opt out of unintended pregnancies involves unsafe abortion methods such as remedies prescribed by traditional healers – which can be fatal.

But Amin’s work educating hundreds of young people each year on sexual health has changed attitudes in her community around early marriage, unplanned pregnancy and the options available to prevent it, she says, with many of her peers now waiting to start becoming sexually active.

Oromia has the third highest rate of teenage pregnancy in Ethiopia, after the Afar and Somali regions, says Dessalegn Workineh, who runs the Jimma office of the Family Guidance Association of Ethiopia [FGAE], which is supported by IPPF.

“In Oromia, out of this rate of teen pregnancies, almost twenty percent end up in abortion,” he said.

The region also has the third lowest uptake of contraceptives among women aged 15 to 49.

17-year-old peer educator Mastewal Ephrem says that the problem comes down to a lack of information.

“People don’t know about reproductive health and they need this information about how to manage their family, sex and infections,” she said.

Religious and social conservatism make this difficult, especially in poor and rural areas where families receive dowries in the form of money and gifts when their daughters marry.

“Because of not having confidence and not talking to people, girls are doing early marriage,” said Ephrem.

Poverty and other hardships also push girls out of their family homes early and leave them in precarious situations, where they run a high risk of encountering abuse.

“I see girls aged 10, 13 and 15, who live on the streets and take drugs,” said Emebet Bekele, a counsellor working at an IPPF-supported clinic in Jimma that is aimed at helping sex workers.

Bekele provides counselling and testing for HIV and STIs. She talks to girls and women about the full range of free and confidential family planning services available at the clinic.

“Sometimes we bring them from the streets and we test them. Most of them get pregnant,” she said.

She often supports students to get safe abortion care; including girls as young as 13.

Taking sexual healthcare to the streets

Fourteen-year-old Simret Abiyu has turned what she has learned into SRH-themed poems that she pens and performs to her peers in English, Amharic and Oromo.

“Sometimes I get training here and write poems about family planning and the work of FGAE and the development of the country,” she said.

Healthcare and advice via the phone

University student Nebiyu Ephirem, 26, is a youth leader at the centre. He has been managing the two SRH helplines – located in a quiet back office – since it started in 2017.

He answers a lot of calls from young people asking about contraception or their bodies and people dealing with emergencies and tries to answer their questions or refer them to public, private or FGAE clinics across the country.

“Culturally, people used not to want to discuss sexual issues. They fear discussing these openly with family, and due to religious beliefs, so people like to call me,” said Ephirem.

The youth centre reaches more than 11,000 young people a year through its work at schools, and through outreach clinics located in coffee plantations, where many young people work.

Currently, the youth centre uses the helpline, radio adverts and social media to inform people about sexual health. The team hopes that media campaigns can spread the message wider in order to raise awareness about young peoples’ sexual health needs. 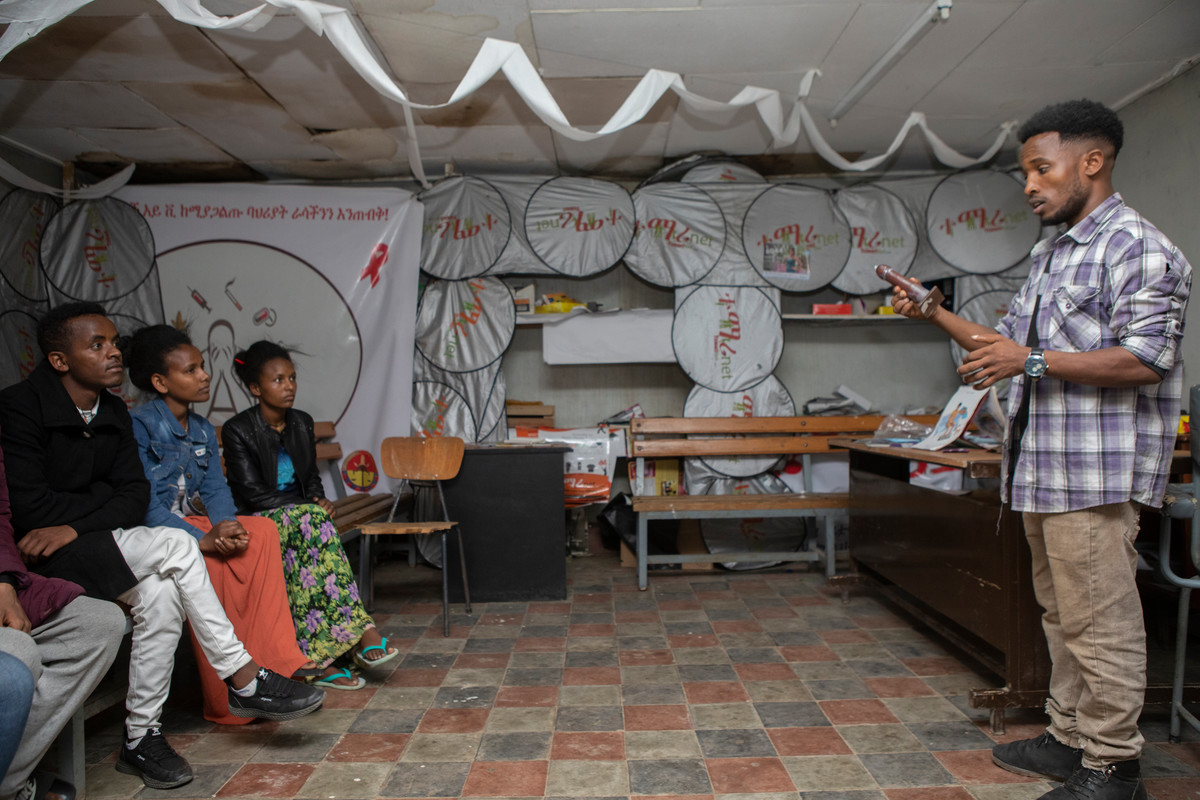 Every Saturday, about 40 people gather at a youth center in Mekelle to hear about a subject they don’t get taught in schools in Ethiopia, and don’t want to discuss with their parents – sexual and… 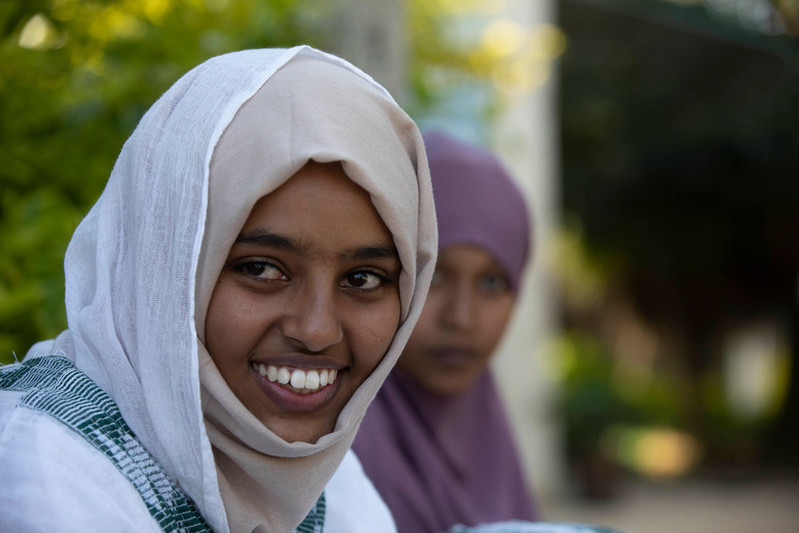 17-year-old student Jumeya Mohammed Amin started educating other people about sexual and reproductive health when she was 14 years old. She trained as a ‘change agent’ for her community through the… 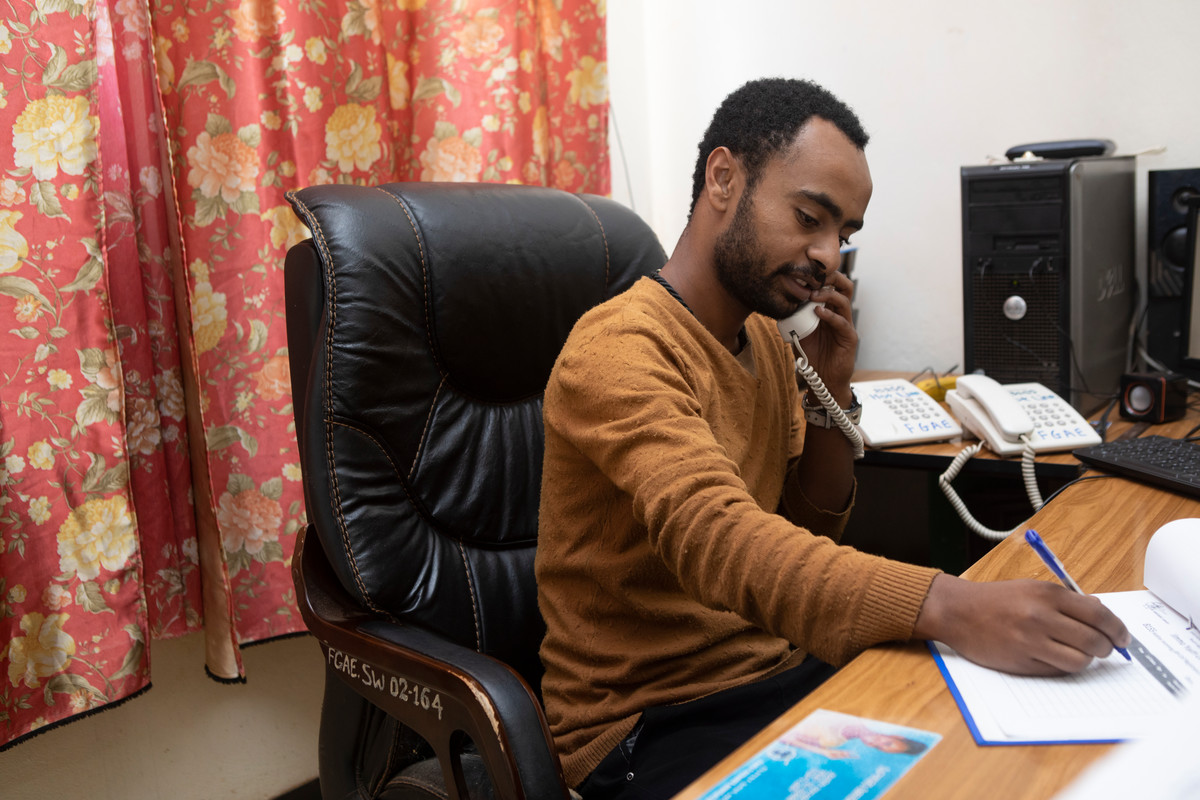 "I'm a volunteer here, so it’s mental satisfaction I get from doing this"

Youth leader Nebiyu Ephirem, has been staffing the phones at a hotline for young people who have questions about sexual and reproductive health since it started in 2017.