Why 16 days of activism against gender-based violence matters

25 November marks International Day for the Elimination of Violence against Women, and kicks off 16 days of activism against gender-based violence (GBV).

The global #MeToo movement has helped expose how widespread a problem sexual violence is, but it is by no means something new.

In fact, violence against women and girls is more common than we might think, and the global figures on it are bleak; one woman in three worldwide has experienced physical or sexual violence, and more than 700 million women were married as children. Those girls who married young are often unable to negotiate safe sex, leaving them vulnerable to early pregnancy as well as sexually transmitted infections and HIV.

Why women don’t speak out

Many women who have suffered from violence are left silent and afraid of the consequences if they speak out about their experience.

In the event that they have taken that bold step to tell someone, women and girls are victimized after their reports have been taken. Stigma and persecution which can lead to them and their families being ostracized.

Another common barrier for victims of sexual violence seeking help, support and justice is financial.

Breaking the cycle of violence

That’s where IPPF and its member associations come in; from tackling female genital mutilation in Somalia, to dealing with the increased risk of sexual violence in the aftermath of a humanitarian crisis and preventing child marriage in Malawi to delivering training to parents in Sri Lanka concerned for their young children’s safety.

For decades, IPPF and its members have been working to break the shocking cycle of violence. Our projects focus on building resilience and empowering people, through access to appropriate and sensitive health services, education and counselling to support them through their experience.

GBV is a persistent and widespread global tragedy that needs to end. We must not forget that this is a blatant human rights violation experienced by millions of women and girls around the world.

So before these 16 days of activism wrap up on 10 December (Human Rights Day), get involved by sharing the image below on social media (you may need to save it to your device first), and completing the text “If gender-based violence ended, women and girls could…”

Together we can help end GBV once and for all. 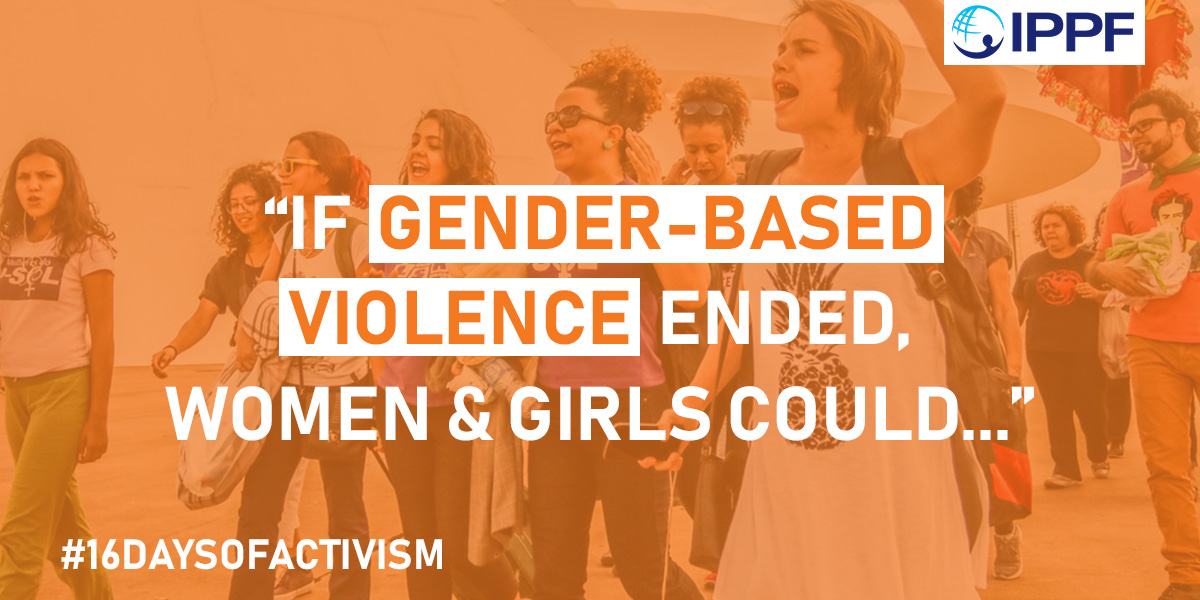