“The big challenges are teenage pregnancy and early marriage"

“I was 18 when I married. But back then that was old!” 76-year-old Makholu Mahao laughs as she goes on to list her nine children – 4 boys, 5 girls including twins.

“At the time that I was married, if I knew about contraceptives, I wouldn’t have had so many children,” she insists.

Her tone becomes forceful and serious when she shifts to subjects like teenage pregnancy and childhood marriage, both ills that are prevalent in her village in the Semonkong region, known as Tsenekeng Hamojalefa.

The village sits atop a rocky hillside, most easily accessible by horse or donkey, and 114 kilometres from the capital, Maseru. She is the village chief now, a post she took up when her husband, the former chief, died. And to her, “the big challenges are teenage pregnancy and early marriage. We’re seeing the difficulty in labor, children dying in labor, and young mothers dying in early labor. Those are the main things I need assistance with,” she explains to staff from Lesotho Planned Parenthood Association (LLPA), on a field visit to LPPA’s mobile clinic down the hill from Makholu’s home.

“How can we stop this problem,” she asks her visitors.

Underage girls “marry at a young age, they don’t know what marriage is. They bear children and bear children and have problems, like death or infant death,” she reiterates. And it’s not just family planning that benefits the residents of her village. 16 villages ring the hillsides around the mobile outreach post, set up today to offer family planning, counseling, and HIV testing. 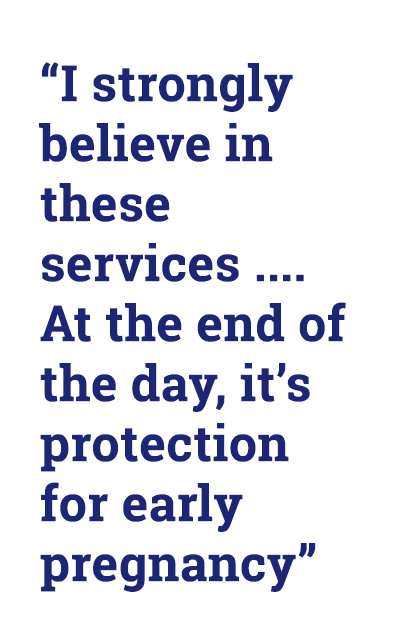 Before the arrival of LPPA on a monthly basis, “we were not receiving any other services other than the two clinics,” she explains, describing clinics approximately 40 km from her village. She adds, “We would leave early in the morning to get there at 9 or 10 to get the services. It was very congested so we would leave and get back here without getting any services.”

When it comes to combatting stigma in a patriarchal society, this great grandmother says some couples do go together for services or at least are in agreement about pursuing services. Still, “men cannot go with the women,” she explains. Throughout the day, men and women gather in separate groups outside the LPPA tents to receive consultations separately.

She sends a strong message by giving her OK for underage single women to seek family planning services. “It is acceptable that [minors] can get it [services], single or not,” she says. “At the end of the day, it’s protection for early pregnancy. The elderly – like me – don’t usually agree with that. But the [minors] will go on their own, however they can. I support that.”

Lesotho: Filling the funding gaps and rebuilding relationships after GGR
Read more
The Global Gag Rule: Rebuilding trust in Lesotho after devastating funding cuts
Read more
"This is a relief. I'm feeling very happy now that services have been brought”
Read more
"Our being here is actually bringing the service to where they are and where they need it"
Read more