“We are losing precious time"

This article is available in English and Japanese.

In November 2017, Planned Parenthood Association of Zambia (PPAZ) received the news that they must cease all USAID funded programmes. The stop order was a result of the 'Global Gag Rule' (GGR), also referred to as the Mexico City Policy. The reinstatement of the policy has resulted in Planned Parenthood Association of Zambia losing 46% of its funding. You can learn more about the Global Gag Rule here.

“When I lost my job as service delivery manager [at PPAZ USAID's Open Doors project], I felt like a part of me had died, I’m very passionate about this. I look forward to seeing a day where everybody will be free to access health services without stigma and discrimination, especially public health facilities. That’s what I’d like to see, [I] want to see integrated services, being provided to key populations, without stigma and discrimination, and fear of being arrested."

The reinstatement of the ‘Global Gag Rule’ resulted in the termination of Planned Parenthood Association of Zambia grant for the USAID Open Doors being terminated.

Chipili says “We didn’t expect its implementation to come with the termination of the grants suddenly. We thought that we were going to be given time, a year, one year to work and complete the project and hand over to the partner that was going to take over the responsibilities that Planned Parenthood Association of Zambia handled.” 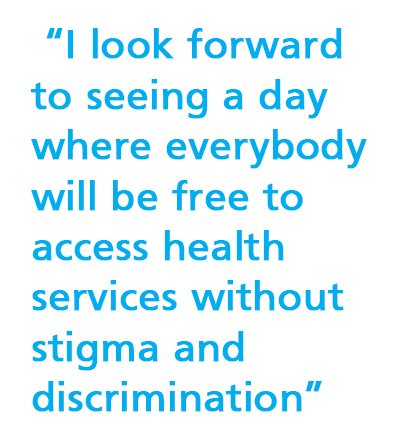 The termination of the project means progress that has been made, especially the work done to help reduce the number of HIV and STIs cases among the key populations will be undone. Progress, that is desperately needed to meet Zambia’s targets on HIV reduction.

“We are losing precious time. We have got targets to meet as a nation, we need to ensure that by 2020 we reach the 90/90 goals, set by UNAIDS, and also the country has a broader vision of eliminating the threat of HIV, HIV as a public threat by 2030. So if we have such stumbling blocks, then the targets might not be met.

Other impacts have been the increased vulnerability and the lost investment of peer promoters from the key populations and loss of safety and security that was provided by the organization.

Loss of safety and security

“For safety and security, key populations cannot freely go to facilities they don’t know very well. The clinic setup was the most ideal set up for them. No one would question them, because this is open to everybody. But now what the project is doing, they are renting houses, the USAID is renting houses where they are providing services, so a house is very different from a clinic, that also affects the element of sustainability.

The element of sustainability has also been lost because PPAZ has been here for a long time, since 1972, so we were hoping that the project was going to build the capacity for PPAZ to continue providing services to key populations that are free from stigma and discrimination. That has been lost. To me it’s a lost opportunity.”

The Zambia National AIDS/HIV Strategic Framework for 2017 to 2021, bears a strong emphasis on leaving no one behind when it comes to stopping the HIV/AIDS epidemic.

“No one should be left behind, if we are to reduce HIV infections to zero, if this is not done, the dream, the vision will not be achieved, we cannot afford to start pointing fingers, we have to use the public health approach and eliminate the risk of HIV infection amidst our people”.